The short clip of the bikini-and-mask-wearing a woman was recently caught on camera at the Miami airport. You might be wondering what’s so unique about a woman at the airport. Well, unlike most of us, this woman was seen wearing just a bikini and face mask. 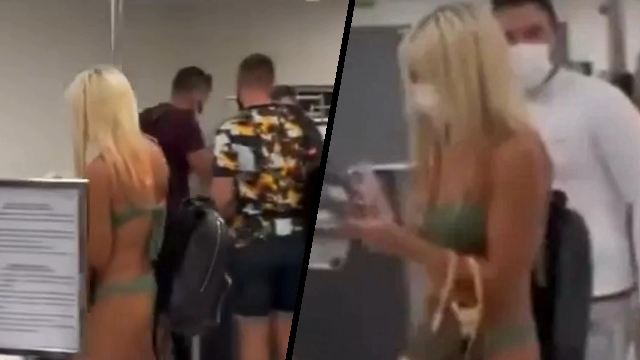 A woman struts through airport wearing only a bikini and mask

Casually, an unknown blonde woman struts through a US airport in her bikini, carrying two bags and wearing a mask.

This clip was posted by a page called ‘Humans of Spirit Airlines’ on Instagram. The caption was hilarious as it read, “When you have a pool party at noon and a flight at 4pm”. The anonymous woman is seen flaunting her body with pride in an olive green bikini and a face mask, which stands as a mandate with Federal Aviation Administration. This one video has taken social media and the internet by storm. It has been viewed more than 2,00,000 times on instagram.

The Transportation Security Administration announced last month that fines of up to $1,500 could be given to passengers who violate the mask mandate.

A post shared by Humans Of Spirit Airlines (@humansofspiritairlines)

“The video could have been taken at any time or any place and it has no identifying characteristic of any airline. I checked, and we have no record of this on file.”