Jade Carey narrowly beat out Italy’s Vanessa Ferrari to win gold at Tokyo Olympics 2021. The 21-year-old girl put on a phenomenal performance during the floor routine final and finished with a score of 14.366 to win her first individual gold medal. 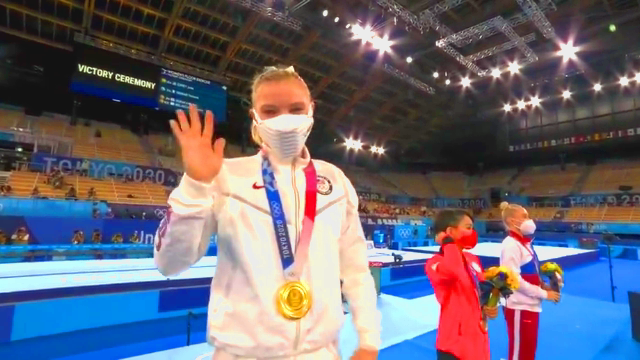 Jade Carey gold medal result is the latest U.S. Olympic gymnast to win a gold medal.Tuesday, the final day of women’s artistic gymnastics, will see Biles return to the competition. She’ll compete in the balance beam individual final with Sunisa Lee, the gold medalist in the all-around individual event.

The medal is the fifth from the U.S. women’s gymnastics team while star Simone Biles sits on the sidelines to focus on her mental health.


She looked happy and relieved as she walked off the mat. She also competed in the individual final of the vault, where she appeared to bail out of a more difficult maneuver and ultimately placed eighth.

Jade Carey – whose father is her coach – became the new floor exercise champion, scoring 14.366 to take home gold at the #TokyoOlympics!

The moment Brian Carey stopped being a coach and hugged jade carey as her father what a heartbreaking and heartwarming moment at the same time i want to give jade a big hug too.

what a heartbreaking and heartwarming moment at the same time

i want to give jade a big hug too#olympics pic.twitter.com/TOscDVczO0

Jade Carey gets it done at the Floor Final and takes home the ?! What a moment for Jade, competing alongside her dad and coach, Brian! Stand up, Arizona! #Tokyo2020 pic.twitter.com/VfflLarJZG

What a performance for Jade Carey (@jadeacarey), as she turns in a 14.366! #Tokyo2020 pic.twitter.com/tzfNUDbDzH