H.S. football coach Trent Dilfer is showing his regret over a wild blowup on one of his players over the weekend. Trent Dilfer in hot water for shoving and screaming at high school player.He is expressing he was flat-out wrong to shove and yell at the kid.

Former NFL quarterback Trent Dilfer gave an apology over the weekend after he was caught on video berating and shoving one of his high school football players.

49-year-old Dilfer — who won Super Bowl XXXV with the Baltimore Ravens — went viral for unleashing on Lipscomb Academy star Beau Dawson. Getting in his face and pushing him in an attempt to get him to sit on the bench during a game on Friday.

“First and foremost, I take full responsibility as the head coach and leader of our team for not deescalating an emotional situation with one of our players, Beau Dawson,” Dilfer said in a statement through the school, according to Pro Football Talk. “Beau is one of our finest student-athletes and embodies all the characteristics we are looking for in our Mustang players.

Trent Dilfer doesn’t like when his high school players talk back at him ? pic.twitter.com/xZA15WHVhn

“During a moment of frustration in an attempt to get our team to play with more discipline, I unfairly singled Beau out. Somehow Beau Dawson has been portrayed publicly as the culprit in this situation, when in reality I should have been a better leader and shown greater wisdom and discernment in how I handled this incident.”

There has been no word on whether Dilfer will face any disciplinary action.

A statement from our Head Coach Trent Dilfer on the viral video going around #BeSetApart pic.twitter.com/uzS1DFt03D

Who is Trent Dilfer?

Trent Farris Dilfer (born March 13, 1972) is a former American football quarterback and analyst who played in the National Football League (NFL) for 14 seasons. He is best known as the starting quarterback of the Baltimore Ravens during their Super Bowl-winning season in 2000.

Dilfer was selected in the first round of the 1994 NFL Draft by the Tampa Bay Buccaneers, where he played six seasons. He signed with the Ravens in 2000 as a backup before becoming the team’s starter midway through the year, which concluded with the franchise’s first Super Bowl victory in Super Bowl XXXV. Despite the championship, Dilfer was not re-signed by the Ravens, becoming the first starting quarterback to be released after a Super Bowl win. His next four seasons were spent primarily as a backup with the Seattle Seahawks and he had short stints with the Cleveland Browns and the San Francisco 49ers before retiring in 2008. 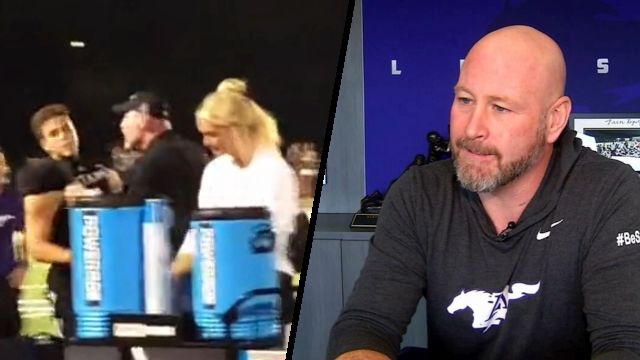