Hello friends, yesterday, a video has gone viral of Leopard-Cat Fight. Where you can see that Leopard and cat’s nail-biting fight video in Maharashtra’s Nashik. The most important thing is that, it is under the well(little water). There were little water in well it was dry. And both Leopark and Cat are fighting. The cat has no fear. It is such a great video where you are facing the time and fighting of lives and death.

This video has gone viral with storm in the Internet. From this video, we can learn that, you have fight with the situation alone in life. Be strong. 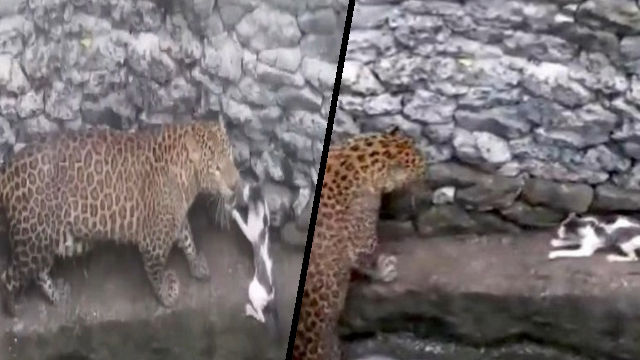 Pankaj Garg, Deputy Conservator of Forests, West Nashik Division said, ‘The leopard fell in the well while chasing the cat. It was later rescued and released into its natural habitat’.

Take a look at the video here:

#WATCH | Maharashtra: A leopard and a cat come face-to-face after falling down a well in Nashik

“The leopard fell in the well while chasing the cat. It was later rescued and released in its natural habitat,” says Pankaj Garg, Deputy Conservator of Forests, West Nashik Division pic.twitter.com/2HAAcEbwjy