Bharat is going to celebrate its 74th Independence day and reminding the day and remembering all the soldiers who had given sacrifice and make Bharat Independent.

Today, it is the happiest day for me and the whole Bharat that we are celebrating this vijay diwas. We have to ask myself that “Are we independent?”

Today, it is the time to rethink on this. We are all stuck in our lives in negative thinking, ego, lust, anger, greed, attachments, beliefs etc. Again we have think that Are We Independent? Or we all are bound in such vices. We are all slaves of our mind. That is why we say, “Mera Man kar raha hain”. Our mind is our enemy and friend both. The real thing is that Do we make our mind friend or enemy?

What is Real Independence Day?

“The Freedom is knowing that no one and nothing ever can take away your peace except your own negative thoughts, beliefs and attachments.” 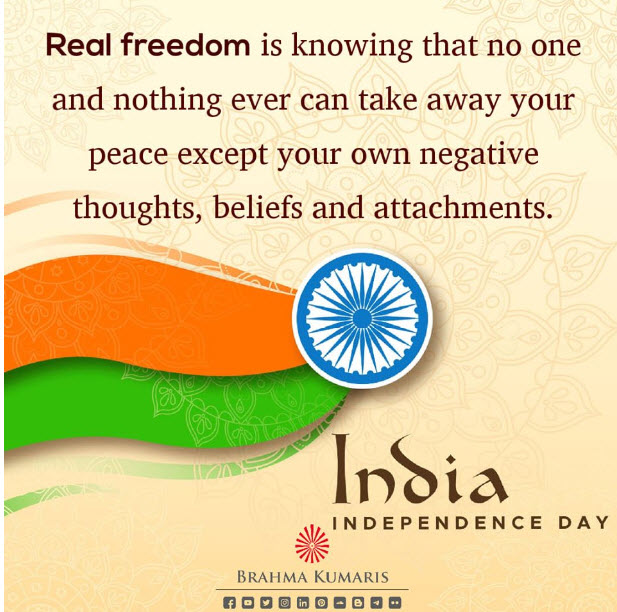 How many years India got independence in 2020?

Ans: Let us tell you that in 2020 India will celebrate its 74th Independence Day.

When was the first Independence Day celebrated in India?

On 15 August 1947, the first Prime Minister of India, Jawaharlal Nehru raised the Indian national flag above the Lahori Gate of the Red Fort in Delhi.

Who is known as the father of India?

What is India’s full name?

Ans: India, officially the Republic of India (Hindi: Bhārat Gaṇarājya), is a country in South Asia. It is the second-most populous country, the seventh-largest country by land area, and the most populous democracy in the world.

What is the National Song of India?

What is the national Anthem Of India?

What is the capital of India?

Describe The National Flag of India


The Indian national flag is a horizontal tricolor of saffron, white and green.

The white denotes truth and purity and

the green stands for life, faith and chivalry.

The wheel in the Centre is a representation of the chakra, which appears on the abacus of Ashoka’s pillar. The wheel symbolizes unceasing motion and progress.

1.Remembering our past is extremely important. But we also have to think about building our future. Let’s do everything to keep our freedom and carry it through the years. Happy Independence Day to the whole nation!

2. Let’s keep the memories of all the people who sacrificed their lives for our country alive. Wishing you a Happy Independence Day 2020!

3. Every citizen of India must remember that…he is an Indian and he has every right in this country but with certain …duties. Sardar Vallabh Bhai Patel

4. Let us honour the struggles of many bravehearts who fought for the country’s freedom. Happy Independence Day 2020!

5. May the sun in his course visit
no land more free, more happy,
more lovely,
than this our country!
Sardar Bhagat Singh

6. I dream of an India that is prosperous, strong and caring. An India, that regains a place of honour in the comity of great nations. Atal Bihari Vajpayee

7. A country’s greatness lies in its undying ideals of love and sacrifice that inspire the mothers of the race. — Sarojini Naidu.

8. A big salute to all the soldiers who sacrificed their lives for our independence! Jai Hind!

9. Today we celebrate the glory of freedom. We don’t understand the value of it until we lose it, so let’s remember about that and never let it go. Joy to the nation. Happy Independence Day!

10. Never forget the sacrifice of our freedom fighters who formed this country. Jai Hind!

11. Let new India arise out of peasants’ cottage, grasping the plough, out of huts, cobbler and sweeper. -Swami Vivekananda.