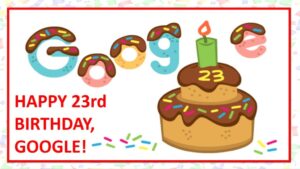 When Is Google’s Birthday?

Google was founded on September 4, 1998, by Larry Page and Sergey Brin. But the company has decided to celebrate its birthday on 27th September every year.

Google LLC is an American multinational technology company that specializes in Internet-related services and products, which include online advertising technologies, a search engine, cloud computing, software, and hardware. It is considered one of the Big Five companies in the American information technology industry, along with Amazon, Facebook, Apple, and Microsoft.

Google was founded on September 4, 1998, by Larry Page and Sergey Brin while they were Ph.D. students at Stanford University in California. Together they own about 14% of its publicly-listed shares and control 56% of the stockholder voting power through super-voting stock.

Two computer scientists have changed the world of the Internet where large number of peoples search on Google in more than 150 languages around the world.

Many Many Happy Returns Of The Day