Today, the search engine Google has shared an interactive doodle, celebrating Christopher Reeve’s 69th birthday who was an American actor, director, author, humanitarian and activist, best known for playing the main character and title role in the film Superman (1978) and its three sequels. 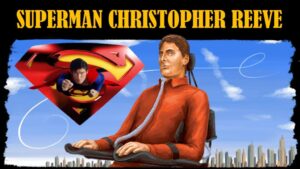 Who was Christopher D’Olier Reeve?

Christopher D’Olier Reeve (September 25, 1952 – October 10, 2004) was an American actor, director, and activist, best known for playing the main character and title role in the film Superman (1978) and its three sequels.

Born in New York City and raised in Princeton, New Jersey, Reeve discovered a passion for acting and the theater at the age of nine. He studied at Cornell University and the Juilliard School and made his Broadway debut in 1976. After his acclaimed performances in Superman and Superman II, Reeve declined many roles in action movies, choosing instead to work in small films and plays with more complex characters. He later appeared in critically successful films such as The Bostonians (1984), Street Smart (1987), and The Remains of the Day (1993), and in the plays Fifth of July on Broadway and The Aspern Papers in London’s West End.

Who was Christopher D’Olier Reeve?

Board member of Christopher and Dana Reeve Foundation

How did Christopher Reeves get paralyzed?

On May 27, 1995, Reeve, a strong athlete and avid horseman, was left paralyzed from the neck down after being thrown from his horse and breaking his neck during an equestrian competition in Virginia.

Reeve found his passion for acting in 1962 at age nine when he was cast in an amateur version of the operetta The Yeomen of the Guard; it was the first of many student plays. His interest was solidified when at age fifteen, he spent a summer as an apprentice at the Williamstown Theatre Festival in Williamstown, Massachusetts.

His performance as the iconic superhero in the four-part film franchise launched him to international fame, but he refused to be typecast in action roles.

In 1995, Reeve was paralyzed from the neck down due to a riding accident; these injuries led him to become an outspoken champion for those with spinal cord injuries and other disabilities across Hollywood, the nation, and the world.

Today, his legacy is carried on by the Christopher & Dana Reeve Foundation[http://christopherreeve.org./], which he founded in 1998.

Happy birthday, Christopher Reeve—who remains a hero to many both on and off the screen!